Definitely not your typical Bali experience, Frankenstein’s Laboratory packs in the revellers. These revellers seemed to be mainly Aussies, with several large families, a hen’s party and groups of female friends in the mix. We were a bit nervous to find that our reserved table was smack bang in front of the stage and were sure we’d be in for a bit of something uncomfortable. As it turns out, when we declined the offer to have our photos taken with the ghouls who do the cabaret act, we were told we had to be judges. Judges of the screams made by the groups who came up for the next hour to have their pics taken with the ghouls. Jason, the host of Frankensteins, did a sterling job in getting the many groups on and off the stage, and encouraging them to scream as if their lives depended on it.

When our two Balinese friends joined us, they were a bit bemused by the whole set up. Being the only non-tourists in the place, I don’t know whether they were taken aback by the whole shebang, or just politely appalled by it. They probably did question why there were no other locals there, but I guess this is the sort of novelty venue that appeals to people on holiday.

After the photo sessions, the first cabaret act ensued, with a tribute to Michael Jackson. Two other cabaret acts follow during the evening – a Beetlejuice and a Rocky Horror tribute. Rocky Horror was our pick for the evening, with the cabaret act getting right into the spirit of things, and the guy dressed as Franknfurter doing a brilliant job in his stilletoes and suspenders.

In between the stage shenanigans, we ordered our meals consisting of burgers, fries and a pizza. The burgers fell apart, and were tasteless and ordinary, and none of us finished them. The fries were limp and the worst I can remember eating for a while. I didn’t try the pizza, but it was large and cheesy and looked ok. It’s not hard to make decent fries, but I think the emphasis at Frankensteins is on getting the food out quickly, and quality doesn’t enter the equation.

Drinks here are served in blood bags and syringes, and they’re very cheap. I stuck with the local wine (not bad actually) at $6.90 a glass. We had to constantly flag down wait staff, who seemed more concerned with chatting to each other at the bar than making sure the patrons were being served.

The Monster Band played a few sets of music in between the cabaret acts. We were pleasantly surprised by just how good the band was, with quality vocals and musicianship. They were far better than the bands we heard playing up on Eat St on Saturday night, and they didn’t have to try too hard to entice folks up on the dance floor.
Despite our initial misgivings, we had a really fun night. I guess this place isn’t for everyone, but it really suits families and big groups. Everyone was there to have fun, and have fun they did. Don’t go to Frankenstein’s for the food, although I’m sure some people would be happy enough with what’s on offer. We’d been to some incredible eateries and this wasn’t one of them. It was however, a rollicking good night with cheap booze, fun entertainment, and a room full of people who wanted nothing except to have a good time. There’s no cover charge and it’s an unusual and fun way to spend an evening in Bali.

So come up to the lab and see what’s on the slab….. 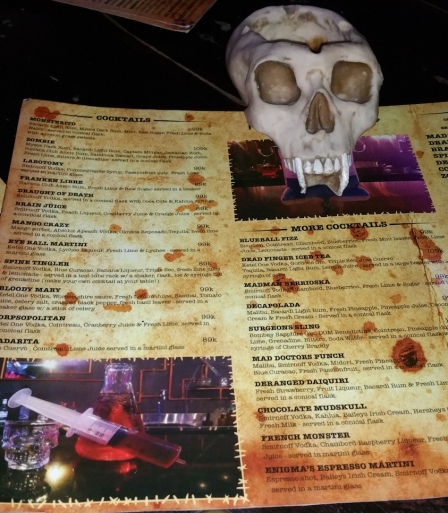