My intro into the world of Indian cuisine and people at the age of 17 opened a whole new world for me – this uneducated Australian palate screamed “where have you been all my life??!!” I sat for hours at the kitchen table, transfixed, as my future mother-in-law showed me how to make flaky parathas the traditional spiral way, how to hang salted lemon pieces in muslin in the sun to cure them for pickles, how to throw a spoonful of panch phora and coconut into a dish of cabbage and beans and transform it into a fragrant treat, how to soak tamarind in water and strain it to make pepper water, and how to mix various spices together to make masalas for different curries. A heady world of tastes and smells that introduced my palate to things that I had never heard of, much less eaten. Spices in Australia then comprised the standard cloves for apple pies, mixed herbs for meatballs, and Keen’s curry powder for curried mince and for egg sandwiches. Chillies? No-one had heard of them, much less eaten them. I still eat my egg sandwiches that old way, but this initiation into Indian cuisine opened my mind and my taste buds to so many new food experiences. I still get a thrill over trying a new recipe or being introduced to a new flavour or texture or cooking method.

Sauma, the new, hip Indian restaurant in town – how would that measure up? Hip isn’t a word generally used to describe Indian restaurants but it’s been bandied around in the same sentence as Sauma, so I was excited at the prospect of  exploring Indian street food, and dishes with a modern twist. Hell, you can twist Indian food any way you like really; there are so many possible flavour combinations, that this cuisine is ripe for innovation and experimentation. Sauma presents Indian feasts for groups, so for $55 each you can sample a cross section of starters and mains. Perfect way to sample a range of what’s on offer.

I have tried countless versions of onion bhaji over the years, but this is the best I have tried. Ever. Anywhere.  The beer batter is probably the killer secret, as the bhajis were crunchy and light with just the right amount of onion, deep fried in good oil, and with perfect spicing and seasoning. I could happily return, order a beer,  munch on a plate of these lovelies, and think I was the luckiest person in the world.

The bang bang chicken is Sauma’s spin on the traditional Tandoori chicken. More subtly flavoured than tandoori, the bang bang was bang on. Succulent oven-cooked chicken pieces with hints of cumin and garlic; this was another dish that had me wanting more.

The lamb ribs were scoffed with gusto by my fellow diners, amid messy fingers and the satisfied smacking of lips. As a non-lamb lover I didn’t try these, but the sweet tamarind and chilli marinade rib dish was a winner for the rest of the table.

Our final starter of roast mushrooms was a fabulous example of India-meets-modern.  The field mushrooms had been tandoor oven-roasted and served with roasted cashews, pomegranate seeds and garlic on a golden saffron sauce. Another dish I’d be happy to polish off by myself. The mere mouthful we each got was only a teasing little snippet of this glorious dish. 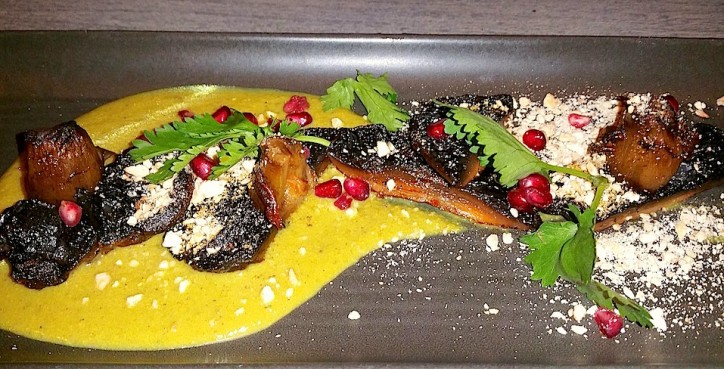 The curries arrived in quick succession, starting with Shark Bay prawns. Redolent with tamarind, curry leaves and cumin, this was my favourite curry. The prawns were chunky and squeaky fresh, and the pieces of eggplant really soaked up the flavours of the curry sauce. The problem with eating a dish like this in a group of eight though, means you get a mere one prawn each. One prawn! Hardly enough to whet your whistle, let alone your appetite. 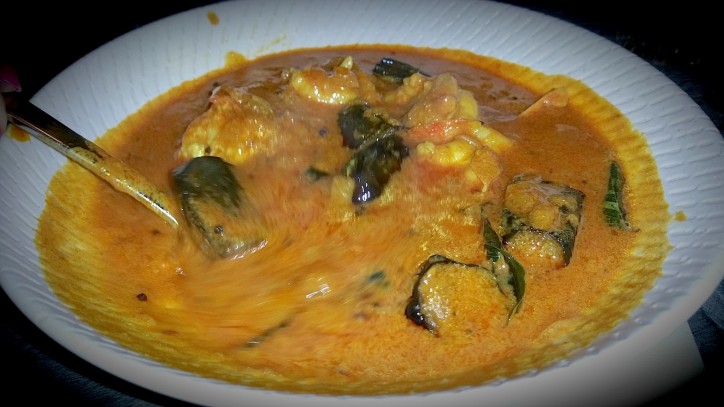 The mountain-style goat curry naturally enough was a big hit with the men at the table. Give the men meat, and they are happy little Vegemites. Another non-event for me, as goat isn’t on my list of things-I-like-to-eat.

Winter vegetable curry was the least exciting dish of the evening. Much as I love veggie curry, it’s really just an everyday sort of dish for me and in a sea of other curries in gravy, it became somewhat lost. I would have preferred a punchy dry potato dish with mustard and cumin seeds, some okra, or some Keralan-style cabbage, if only to provide some contrast to the other curries with gravy. Even though the fried sweet potato added textural interest to the dish, it wasn’t enough to excite me.

Butter chicken here, butter chicken there, butter chicken everywhere. Everyone loves this dish and it’s easy to see why. Cooked properly, you have your tender pieces of marinated tandoori-style chicken, served in a mild but rich, creamy gravy.
I’ve mentioned before that this is the one dish I prefer not to order when I dine at Indian restaurants as the quality varies so much, and because I find it to be one of the least interesting Indian dishes. I’d much rather try a chicken dish with different flavouring – a vindaloo, a dhansak, or a methi curry. Sauma’s version was pleasant and everyone else was satisfied with it. For me, it was missing that overnight-marinated smoky flavour, but then I’m hard to please when it comes to this dish.

Sauma was an interesting culinary adventure and I enjoyed the innovation shown in some of the dishes. I much preferred the starters to the curries, because this was where the creativity of the chefs really shone. Dining in a group of eight probably wasn’t the best introduction because it meant having only a small sample of each dish; but then that has simply encouraged me to return with just a friend or two. Although the dishes are tapas style and designed to be shared, I think it would work better in a small group.  Sauma’s service is top notch, the atmosphere congenial, and the concept welcome.  I suggest you forego the standard Indian curries, and try some of the more unusual and exotic creations, along with a street food favourite like the outstanding onion bhaji.  With a beer to two to wash it down 🙂

One thought on “Sauma”