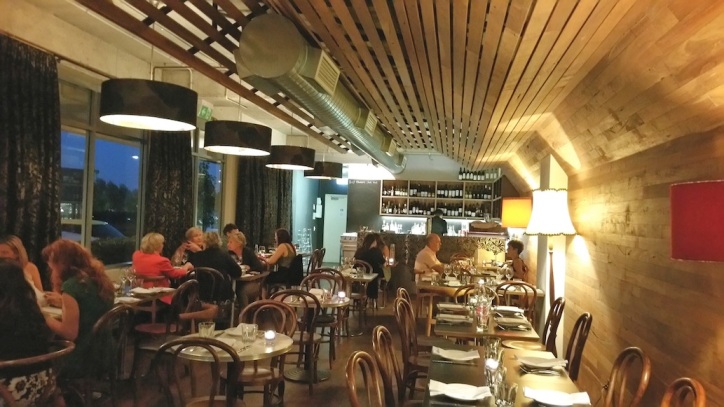 Along the increasingly popular Angove St strip sits Chilli Orange, coolly beckoning with its Asian fusion menu, its funky wavy wooden ceiling and its Tuesday night $45 degustation offer. That of course is what tempted me and a group of companions a few weeks ago. What better way to test a restaurant’s metier than by sampling a selection of its dishes at a really reasonable price?

The evening began on a promising note but as time ticked on and the restaurant filled to capacity, the three wait staff appeared woefully overworked. Trying to get someone’s attention to order glasses of wine proved a Herculean effort and at times we had to resort to doing windmill imitations in our seats.

Our first course arrived within about 30 minutes of being seated and was warmly welcomed. Pieces of tender roasted duck with slivers of crisp vegetables and a slice of red chilli, were wrapped in thin pancakes and dipped in hoisin sauce. Murmurings of approval all round. 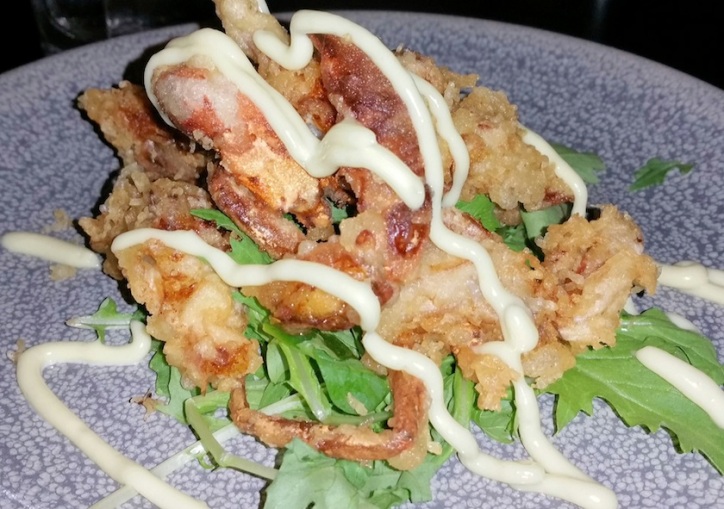 The next course of soft shelled crab with wasabi mayo followed after a 40 minute interval. It’s a long wait between courses here, but that’s not too awful if a) you’re in good company, and b) the wine is flowing. Well as mentioned above, the wine was trickling rather than flowing, but we didn’t die. In fact we were having rather a good time, and so was everyone else judging by the ascending noise level in this little place. You would think the wooden ceiling and wall would cushion the noise, but strangely it didn’t. The crunchy deep-fried crab was crisp and not oily – the bed of peppery rocket foiled the richness of the crab and the mild wasabi mayo complimented it well enough.

Others at my table dined next on the seared rare beef tatsoi salad with chilli, orange and blackbean dressing, and it looked sharp and refreshing with its green leaves and onion and radish slices.

My course was a different matter. There’s always the danger when you request changes to a degustation menu, that you’ll end up with inferior options to your dining companions. Not wanting the red meat options, I was presented with a calamari substitute. This fried salt and pepper dish served with a side of sweet chilli sauce was my least favourite of the evening and was pedestrian at best. It didn’t help that it followed the previous deep fried course.

Grilled swordfish with a salad of pink grapefruit, cucumber and fresh herbs was plated up next, and this was served with a lemon juice, chilli and fish sauce accompaniment. Although the fish was tender, the flavours in the sour sauce did nothing to complement the slight bitterness of the grapefruit. Something sweeter would have lifted this dish and balanced it out.

Just when you couldn’t possibly imagine another course of fried something, out came my next dish of tempura prawns with soy sauce on the side. By this stage I was fried out, and as tasty as the prawns were, this sight made my ole heart sink. With the varied menu on offer at Chilli Orange and with a reasonable choice of grilled dishes, serving up three deep fried courses out of five was unnecessary and ill-thought out. The inclusion of a simple course of asparagus or a salad would have been welcome and far more suitable. However that’s often the way for diners whose dietary habits don’t conform to the norm. There were three on our table of eight who chose not to eat the meat options, and all concurred that we had drawn the short straws. It seemed a great pity too, as there are many interesting dishes on the Chilli Orange menu.

Our other five diners were very happy with their meal. Their fifth course of crisp pork belly was enthusiastically received, but I didn’t think to take a photo to share. There’s no doubt that the five entree-sized courses for $45 is good value for money, but it’s only good value if you enjoy all the courses and if the meal is balanced and well-thought out. For meat lovers that was definitely the case, but for the rest of us, the standard wasn’t the same.

I’d love to return to this restaurant to enjoy a less crowded and less noisy experience when it’s not degustation night and when the staff aren’t so harried. There’s a small but interesting wine list, and the a la carte menu sounds inventive and delicious. Fortunately this little place on Angove Street is only five minutes drive from home, so that makes a return visit easily achievable.